In the month of May there are again many fun activities organized. Curious about the activities? Then read on!

On May 12, the Sustainable Vegan dinner took place. This event was a collaboration of Serve the Green and the Charity committee of Study Association Complex. A three-course vegan dinner was cooked by the committee members and attendees had the opportunity to meet new people! In addition, by attending, attendees helped fund meal boxes for project “Children’s Breakfast Fat Mik. The meal boxes contained dinner ingredients and another fun game for some relaxation. To make the dinner as zero-waste as possible, the leftover soup was also distributed among the attendees. A successful evening! 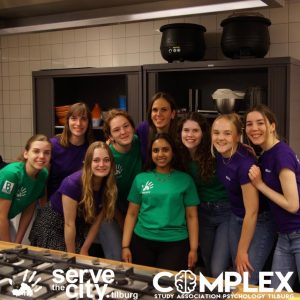 Serve the Green x Petje Af
On Sunday 22 and Sunday 29 May it was time for the Petje Af activities of Serve the Green for the children of Petje Af Hart van Brabant. The theme was sustainability, so the activities were designed with that in mind!

On 22 May the committee members and the children were guests at Groeituin 013. There they were given a guided tour, a photo scavenger hunt was conducted, plants were repotted and at the end they were allowed to work in the garden. Meanwhile, they could enjoy plenty of drinks and a delicious pasta salad. No one went home empty-handed either, because everyone was allowed to take a plant home.

The second Sunday, on May 29, was all about even more sustainability! After a short interview with the committee members, the children could make their own vegetarian pizza. A pizza does not have to contain any meat to be delicious! After the lunch break everyone got busy painting a birdhouse. We ended the afternoon with a debate on sustainability.

Serve the Green was happy to see that the children (and even the staff) really learned something from these two afternoons. Everyone had a great time!

Serve the Wisdom x Petje Af
Serve the Wisdom was also allowed to set up an activity with Petje Af, this time with location Oisterwijk. The theme the children worked with for two Sundays was ‘professions that are not often in the spotlight’!

On 22 May the children were introduced to rat-catcher Piet Maas, who was able to answer all the burning questions the children had. The children made an assignment about animal-friendly ways to catch rats. After the break, Pete showed his equipment and the children were allowed to look through the heat viewer. Then the children did a debate on the theme of Money versus Happiness. A difficult theme, but the participants did well!

On the second Sunday, May 29, the children were allowed to visit the university. They were taught by Groen Xtra in the Cube building. Groen Xtra manages and maintains the public space of Tilburg. The children got to work with waste pegs and interviewed students on campus about how waste could be reduced. After the break, the children were given a tour of the campus and through the Cube building. They found the large lecture hall very impressive! Finally, the children made an ‘advice’ for Green Xtra, about how to reduce waste. The children did not go home empty-handed, they received a Tilburg University goodie bag!

Serve the Wisdom was very pleased to see that the children took the assignments so well. The two Sundays went well! 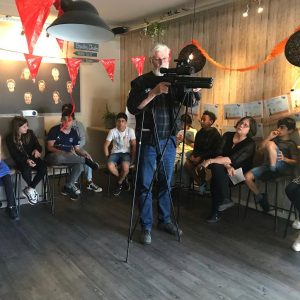 Workshop Serve the Kids x Fontys x Sterk Huis
On Thursday, June 3, Serve the Kids, together with student associations of Fontys, G.D. Herodotus, S.V. Lingua and Omnia Béta, held several workshops in which the children of Sterk Huis had to unravel a mystery. They had to find out who had looted the safe of Mr. Jacobs, the richest factory owner in Tilburg. Through various language games invented by S.V. Lingua they could decipher the alibis of the 5 suspects. Omnia Béta had set up chemistry tests to find out whose blood was found at the crime scene. Then the children were allowed to engage in conversation with the 5 suspects of G.D. Herodotus. It was a fun afternoon where the children quickly found out who the guilty party was through the various tests.

Firefighter activity Serve the Kids x Serve the Wisdom
On June 14, committees Serve the Kids and Serve the Wisdom joined forces. Together they organized an activity at Jeanne D’Arc elementary school, where they introduced the children of group 4/5 to the fire department. Two firefighters came by and the children were allowed to ask anything they wanted. Questions such as “Why are your suits that color?” to “How do you do that with food?” were answered. The children were also given a ‘tour’ of the fire truck and the tools that are on it. They even got to sit behind the wheel and in the cab of the truck! Group 4/5 really enjoyed this activity and there were even a few children who were persuaded to become firemen or women!

Last activity with our volunteers: BBQ
On Tuesday, June 21, the last volunteer activity took place. During this activity we all had a barbeque and a nice chat at Feestcafé de Prins. It was a great activity! Even though the year is not quite over yet and there are still some activities planned, we want to thank all our volunteers for their efforts this year! 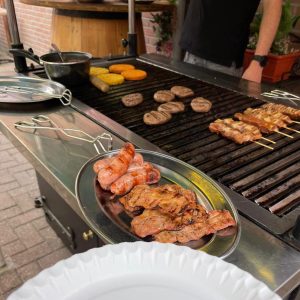 Beer Tasting Serve the Wisdom
On July 22, the committee members of Serve the Wisdom organized an interest drink at La Trappe brewery in Berkel-Enschot. While enjoying a beer, we were explained about the brewing of Trappist beer, but also about life in the monastery. After a very interesting tour with for many as highlight, the own fire engine, we were allowed to reminisce in the shade with a beer (or three). 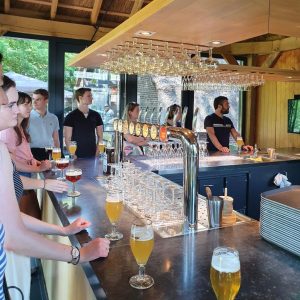 Kids Festival
On Thursday, June 23, we teamed up with Magister JFT | Juribes, Move Foundation and TSR Vidar to host the second edition of the Children’s Festival. This afternoon consisted of several activities including a belly-slide, an obstacle course, several water games, field hockey, soccer and a target shooter. They also all received a cotton candy and an ice cream. In addition, they were allowed to use the lemonade stand that Mc Donalds Tilburg donated to us that day. We enjoyed seeing the children enjoying themselves and also needed to cool down on the water slide. 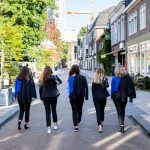